Our book study resources for Snowflake Bentley can be a good way to get students more engaged in this unique book. 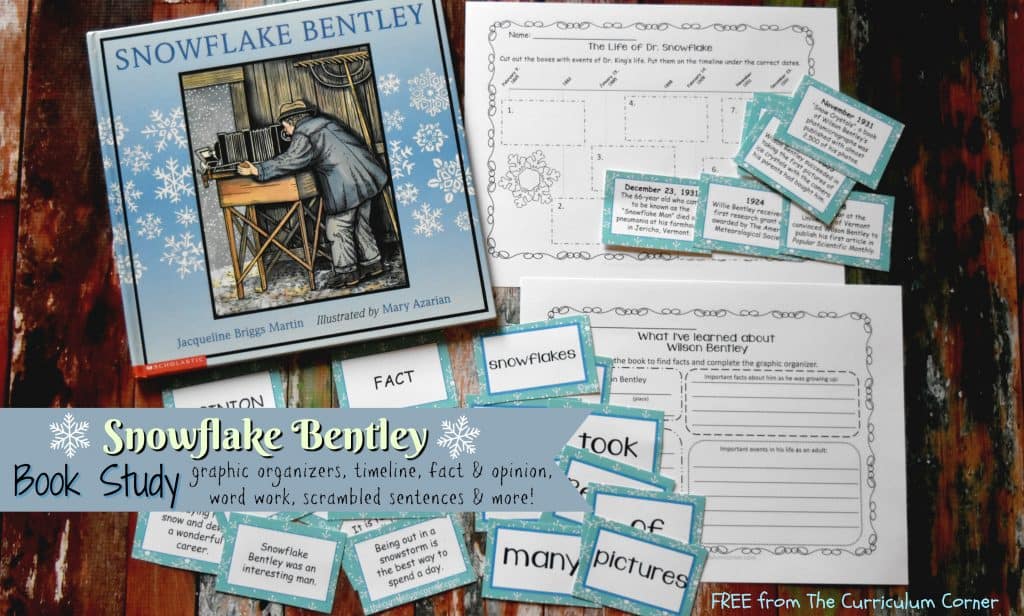 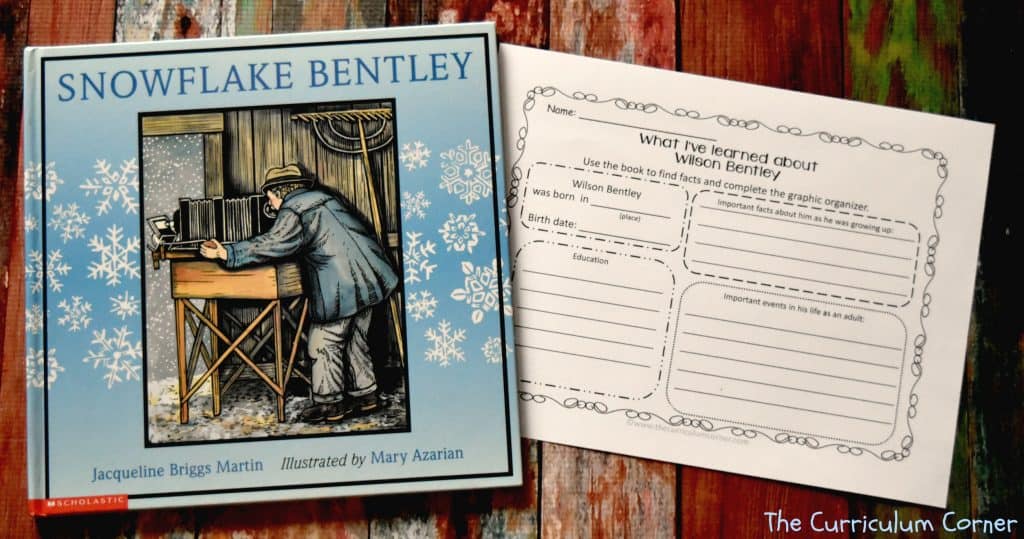 **You will find the full set of resources described below in one download at the bottom of this post in BOLD BLUE font.**

What I Have Learned About Snowflake Bentley – This is a simple and open-ended graphic organizer students can use at a center after the book has been read aloud.  Place the book at the center so students can use it to check the accuracy of their claims about what they have learned.

Main Idea & Details – This page is intended for use as a mini-lesson as you read the book together with your students.

Snowflake Bentley Flip Book – For students to create this flip book they will need to cut on all the bold lines, then stack the pages and staple them along the left side of the book.  Again, this is an open-ended activity as you will want students to determine key points they believe should be added to each page.

You can differentiate by giving fewer pages to students who may struggle with the nature of open-ended activities. You might also consider adding a bit of structure in the form of a specific number of bulleted key points you would like to see on each page.

This Flip Book would also work well at a computer center.  You can use this online link from the Snowflake Bentley official website for students to find additional biographical research for their Flip Books:  Snowflake Bentley Biography.

Bentley’s Character Traits  – If you want students to think more deeply about Wilson Bentley and the type of man he was, get them thinking about the different character traits that describe him best.  This interactive notebook resource can serve as the cover (as students list one trait underneath the hat) or you can have them glue two or three hat cutouts on top of each other (along the left flap of the hat) to list more than one character trait and example from their reading.

Directions: Students cut on the outer bold lines and then fold along the dotted line. Next they glue the small section on the left to their notebooks. They write Snowflake Bentley Character Traits on the front and list the trait along with example(s) from the book on each page.

Making Words – Students use the letters in the word SNOWFLAKE to create smaller words.  Comes with a page of letters for students to cut out and manipulate to make the words.

What Would Snowflake Bentley Say? – This page requires students to use what they have learned about Snowflake Bentley, and think about how he would have used his perseverance and scientific skills in today’s social media to tell everyone about his discoveries.

Fact & Opinion Sort – These cards contain eight facts and eight opinions about Wilson Bentley and his life.  Use them for a center or a small group guided activity to teach or review the difference between fact and opinion.

Reading Response Pages – These two pages have simple reading response questions to be completed after the learning. The first involves simple fact recall and the second asks students to think of a characteristic that made Wilson Bentley a great scientist.

Pocket Chart Sentence Cards – These five pocket chart sentence cards can be used during a mini-lesson or as a scrambled sentence center.  They borders are color-coded for easy sorting and storage. We have included two statements, one question, one command and one exclamatory sentence.

Wintry Words – For this interactive notebook page, students read to find descriptive winter words throughout the book and draw a wintery scene showing something they learned about Wilson Bentley.

Directions: Students cut on bold lines and glue the middle vertical rectangle to their notebook pages.  Next, they draw their winter scene on the part they glued down and fold the flaps fold over it. On the outside of each flap, students write their descriptive winter words from the book.

You will find all of the Snowflake Bentley resources described here:   Bentley Resources

Need to purchase the book or other resources to accompany your study? We are sharing a couple links below (contains affiliate links)